The haven for owners of all generations of Honda Preludes 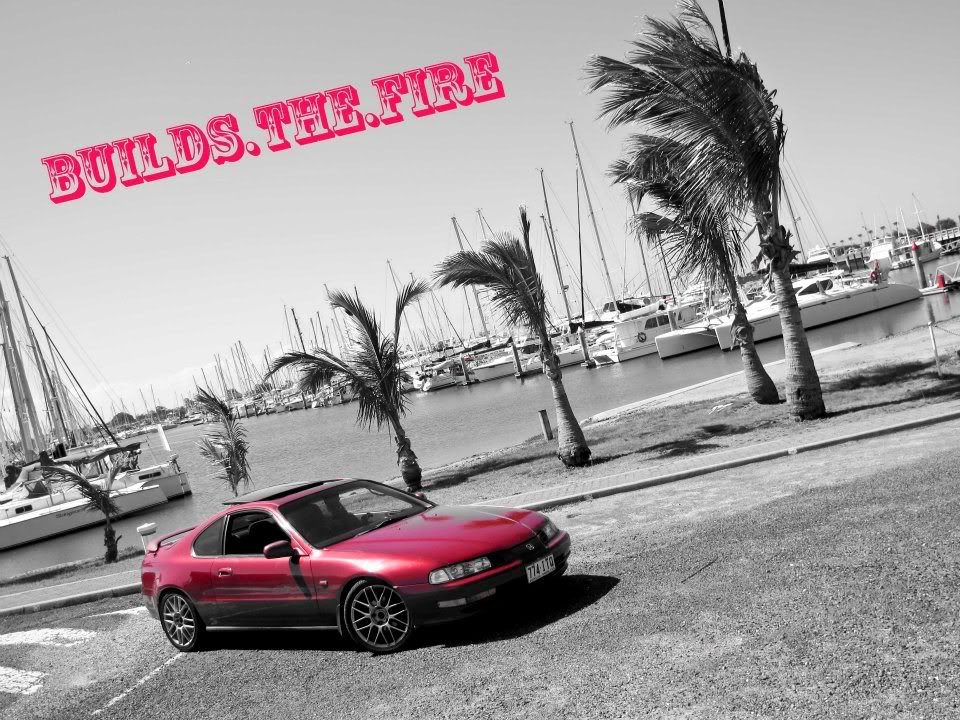 So, my new car is a 1993 Si, 4ws, with an h23a1. It's AUDM, so it has some interesting options already that some of your 4th gen'rs might find interesting. 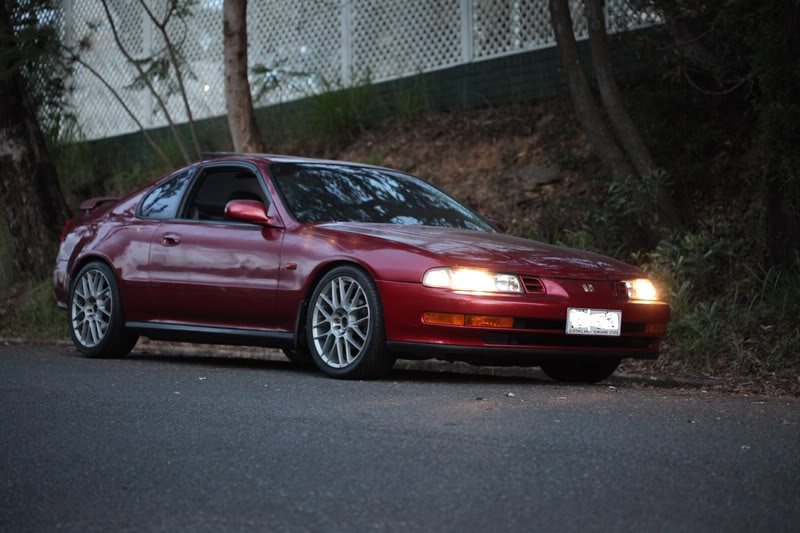 This is literaly 10 minutes into owning the car. I pulled over outside the guys appartment and snapped a few pictures. You'll notice, she's already lowered and on aftermarket wheels with low profile tires. I didn't know what they were at the time, but have since found them to be 17" Sparco NS-II Pythons, wrapped in 3 different brands of tire: 1 Toyo, 1 Hercules, and 2 Duran. The lowering springs are of unknown origin, and will be swapped out for coilovers as soon as funds become available. 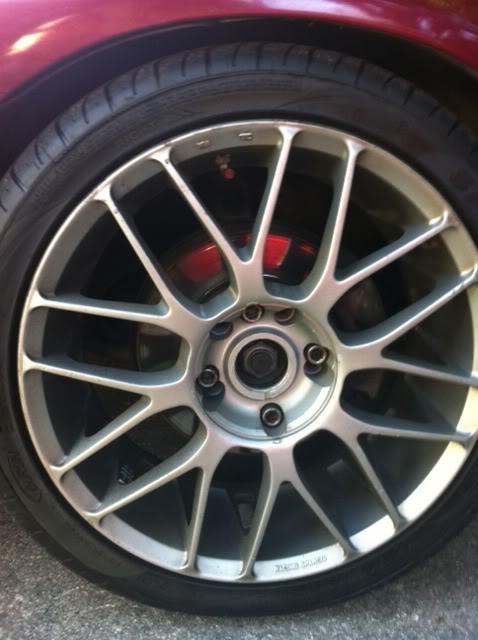 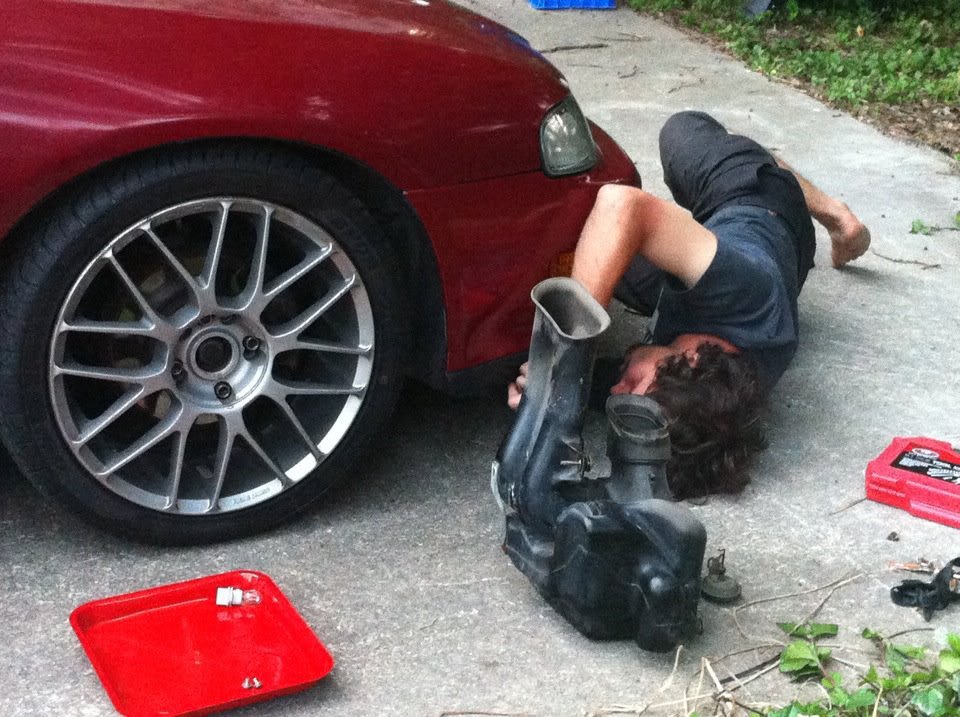 One of the first things I did was drop out the Intake Air Box. There is still a solenoid located under the short ram (also already on the car with a K&N filter), that I need to remove, but I'll do that at a later time. I also put one some black aluminum valve stem caps at this point as well. Money was tight, so only little things happened at this point.

I also joined the Prelude Australia forum around this time, and met up with a 5th gen owner who lived locally. We went to the wreckers one day, and found this gem.... 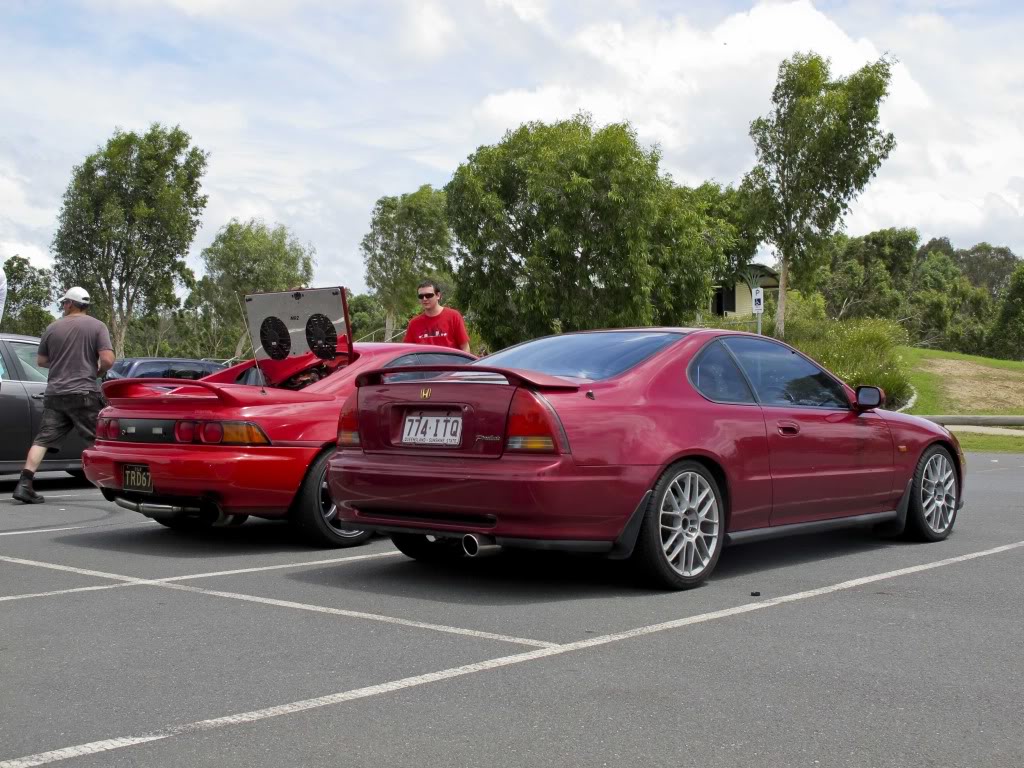 A genuine prelude rear lip, only available in the European markets. I crawled under there, and confirmed it through the serial number even. It's lucky I happened to look at the rear bumper on that 4th gen and spot it, otherwise it would probably be crushed along with the car it was attached to by now. 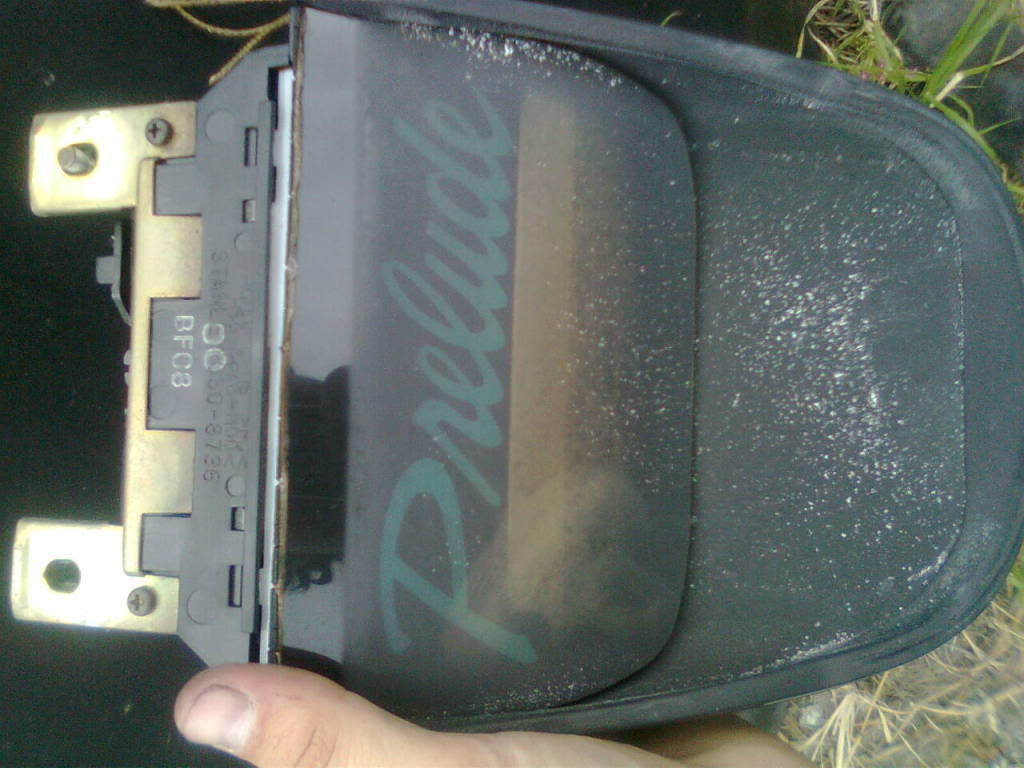 Along with that euro lude, this wreckers also had a black JDM 4th gen, which led to this find. I took this shot right after taking it out of the car, so it was still very dirty. I've sinced installed it, but I havn't wired it up yet. I'll likely have it on a seperate wire, to a switch on the dash, so I can turn it on when I want it on. I get the feeling that cops might not be into a green Prelude light in my rear window while driving...

I also repainted the H emblems satin black, to replace the gold set the car came with, which really didn't suit it very well. 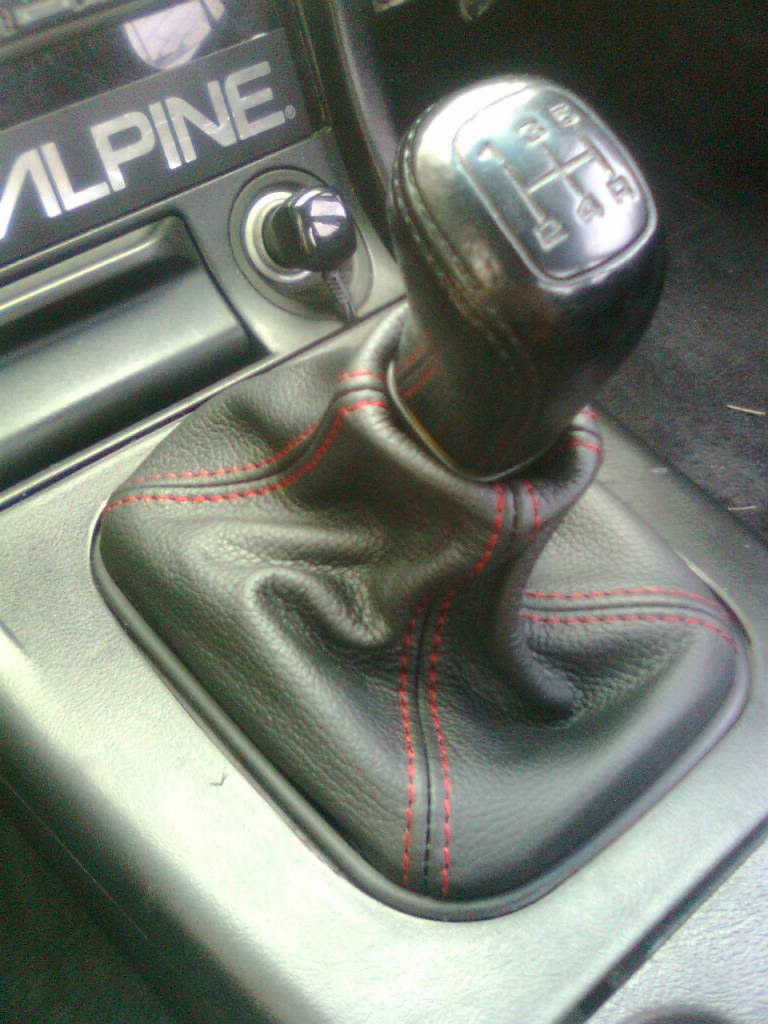 And so we arrive at it's current state. For now, I'm saving a bit of money, so nothing major will happen soon, but in the mean time I'll be cleaning up the car, taking care of little details and fixes. One thing I'll be doing soon is repainting the heat shield. I'll be coating it in satin black, as well as doing something interesting with the "HOT" warning, so I'll have pictures of that next weekend, if all goes according to plan.

Recent changes:
-4000k BlueVision Philips bulbs to replace the exceedingly poor light quality evident in the first picture of this thread
-SMD bulbs for the red-lenses door lights
-repainted rusted brackets and bolts in the engine bay, as well as removing broken ones
-removed old, cracked gray electrical tape wrapped around the wires that go over the valve cover, replaced with black electrical tape.

UPDATE: Not really a major update, but just a bit of maintenance and such. I did an oil change yesterday, I know the car had one done about a month before, but had no idea what type of oil or filter was used, so I drained that all out and put in Castrol Edge Titanium Fully Synthetic oil, with a RYCO Z79A filter, along with a Password:JDM magnetic oil drain plug. Next weekend will be a coolant flush and repainting the heat shield.

Right now I'm sourcing a spare h23 valve cover for powder coating, likely go with a high gloss gunmetal. I also have a Cusco front strut brace on the way to contribute to my suspension overhaul.

UPDATE: The Cusco front strut bar arrive today, only 3 days total to arrive, from Malaysia. I'll hold off on pictures of it for now, no need to see a ratty, neglected strut bar with poor camera quality.

It needs cleaning, so I'll polish the bar, and get the brackets (currently blue) powder-coated black. I may end up holding off on installing until I have my coilovers, so I only touch these parts once before they're on the car.

Also bought a blank Honda key, so that should be arriving in a week or so. Right now i only have one key to the car, and it's not a Honda one.

UPDATE: Went to the wreckers on Friday to have a bit of a look around, see if they had brought in any new preludes. Not much had changed, except for a very clean 2g with no visible damage, though I suspect the engine was blown, but the hood was jammed (like every other 2g in the lot.....) so I couldn't confirm that.
I decided to have another look at the JDM bb1 that's been there for awhile, since I needed to replace my passenger side kick plate. The interior is pretty much stripped, but there was a pile of panels on the drivers side where the seat was, and the panel I was looking for happened to be in it! When I turned it over though..... 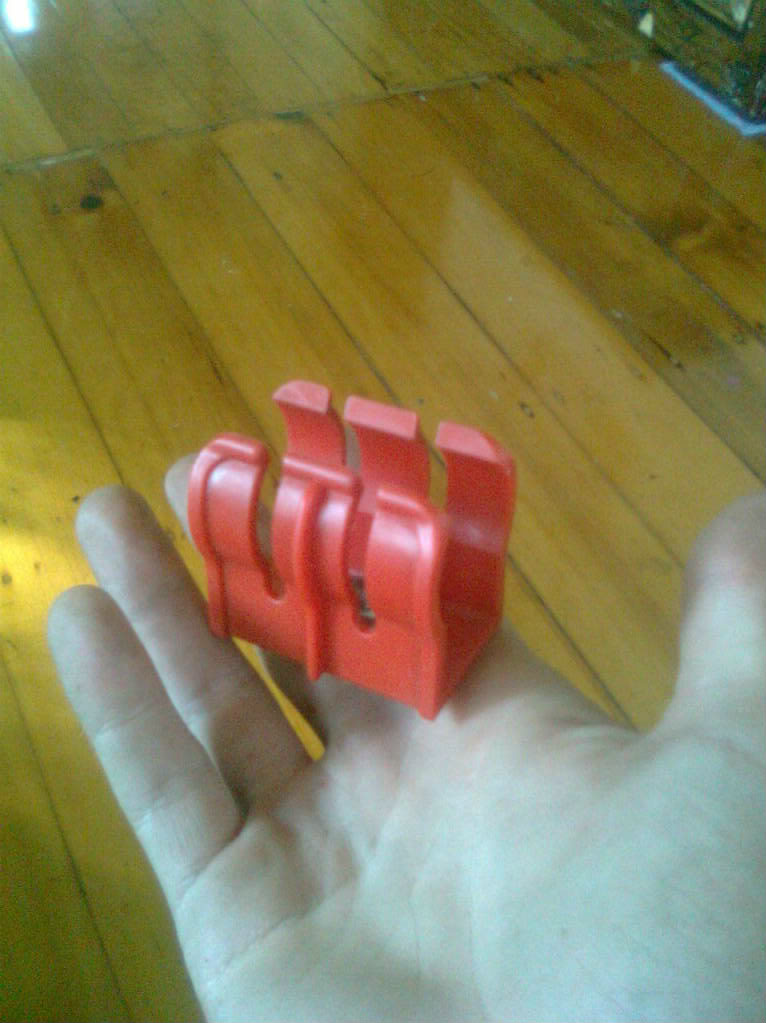 Dude. Buy one in Japan. Import. Profit.
I just watched the Mighty Car Mods film, and they had a black RX-7 at auction in Japan.... for $300 dollars. US Dollars that is. I bet they'd GIVE you a 2g.

UPDATE: Just some simple maintenance related things today, buying coolant to flush the system, and I got a spare key made, one that is a proper Honda key.

I have a set of JDM front mats on the way in the mail, as well as power mirrors w/ relay and switch. I'll be posting pictures when I get around to installing those parts.